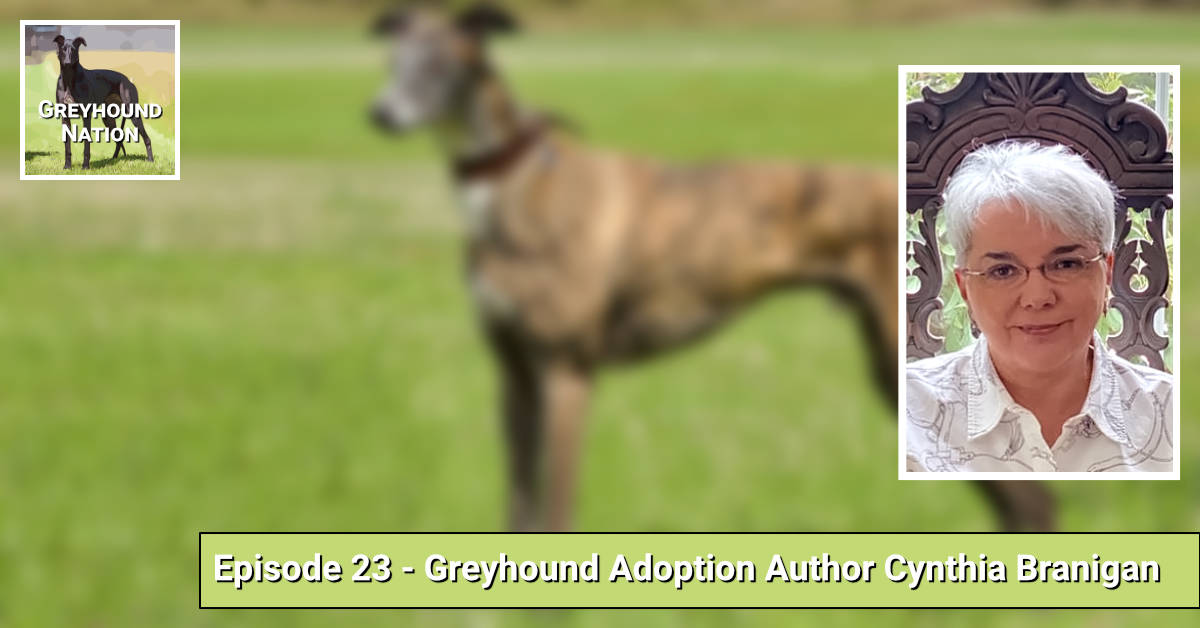 Cynthia Branigan took her first Greyhound, King (fka Low Key Two), to visit a very special horse, Gamal. Gamal was the last of the Atlantic City Steel Pier diving horses. When he was “retired” and put up for auction in 1980, Cynthia purchased him. She rescued King from an unhappy adoption situation in 1987. At the time, he was ten years old and quite depressed. However, he and Gamal realized they were kindred spirts and took to running like old friends.

Cynthia, like many Greyhound people, is also a horse person. Actually, she’s an animal person, having joined forces years ago with Cleveland Amory, the father of the modern animal protection movement and founder of The Fund for Animals. During her time with Cleveland, she ventured to the New Jersey Pine Barrens on a mission to save Gamal from slaughter by purchasing him at auction, an act that set the tone for her life to come.

After adopting King in 1987, she was approached by a local shelter to help find a home for another Greyhound. She decided to set out on her own and started to find homes for Greyhounds in the New England area. In 1988, she founded the Greyhound adoption group Make Peace with Animals and has, to this day, rehomed over 5,500 Greyhounds.

Her passion is more action than activism — finding the right homes for animals like Gamal and King. She has also channeled her passion into writing, publishing two books on Greyhounds. One of those books, Adopting the Racing Greyhound, is in its third edition. Cynthia’s latest book — The Last Diving Horse in America — retells the story of her quest to rescue Gamal from slaughter against the backdrop of her life in animal welfare. The Last Diving Horse in America will be published October 19, 2021.

In this episode, Cynthia shares her passion for animal welfare and Greyhound adoption with host John Parker. Her stories include the rescue of Gamal, the founding of Making Peace with Animals, and what inspired her to write about Greyhounds and her very special equine friend.